The Taj Mahal is “one of the universally admired masterpieces of the world’s heritage,” according to the United Nations. But to music fans across New England and around the globe, Taj Mahal is the stage name of a world-music master.

A multi-instrumentalist maverick decades before “world music” was recognized as a musical category, for 60 years Mahal has honed his craft to a level of substance and sublimity achieved by very few, with 30 studio and 14 live albums and appearances on 28 others by artists as diverse as Ry Cooder, Etta James, Van Morrison, Eric Clapton and Sammy Hagar. A genuinely global citizen, Taj has transcended cultural barriers with grace and aplomb using his forward-looking fusion of Delta Blues, Caribbean, African, Hawaiian, Indian and South-Pacific influences to create a cherished catalogue of songs that live deep in the hearts of millions across generations.

Born Henry St. Claire Fredericks Jr. in Harlem in 1942, his family moved to Springfield in the early 1950s – when it was a quintessential melting pot of people from the American South, Europe, the Caribbean, the Mediterranean and the Middle East – and he was exposed to a vast array of music. His father was an Afro-Caribbean jazz arranger and pianist who had worked with Ella Fitzgerald, who nicknamed him “The Genius.” His mother was in a gospel choir, and the family listened to music from around the globe on a shortwave radio.

Young Henry immersed himself in jazz first, particularly Charles Mingus, Thelonious Monk and Milt Jackson, then Chuck Berry, Bo Diddley and Little Richard, and he developed a passion for African music. At age 11, he started piano lessons while teaching himself harmonica, trombone and clarinet, but lost interest in piano at age 14 when he started taking guitar lessons with his new neighbor, Lynwood Perry, nephew of bluesman Arthur “Big Boy” Crudup. In 1959, Henry Jr. graduated from an agricultural vocational high school, where he sang with a doo-wop group and started playing banjo.

While in high school, Henry Jr. had all but decided to become a full-time farmer and he enrolled at the University of Massachusetts Amherst, majoring in animal husbandry and minoring in ethnomusicology. By his junior year, though, he saw music as his future, taking the stage name Taj Mahal – which he chose after dreaming about Mahatma Gandhi’s spearheading India’s independence – and forming an R&B group, Taj Mahal & The Elektras.

He performed at the UMass Student Union and, after graduating in May 1964, landed a regular gig at Club 47 in Cambridge, in addition to playing at Turk’s Head Coffee House and Charles Street Meeting House in Boston, and the Kings Rook in Ipswich. In 1965, Taj moved to Santa Monica and joined 17-year-old Ry Cooder in the Rising Sons – one of era’s first interracial bands. The group opened for Otis Redding and The Temptations, and recorded for Columbia Records, but the label released only one single. It was not until 30 years later that Columbia released the LP Rising Sons Featuring Taj Mahal and Ry Cooder (1992).

In 1966, Taj began doing regular solo shows at Jabberwock in Berkeley, and in 1967 he recorded his self-titled debut for Columbia, followed by The Nach’l Blues in 1968, when he debuted at the Unicorn Coffee House in Boston and the Newport Folk Festival. He appeared in The Rolling Stones’ Rock and Roll Circus, a film featuring the Stones, The Who and others but which was not released until 1996. In mid-1969, Taj recorded Giant Step / De Ole Folks at Home, a double album, and performed at several New England venues including The Boston Tea Party.

In 1972, Taj wrote the score for Sounder, which won him a Grammy nomination, and in 1976 he scored the sequel, Part 2, Sounder. While touring worldwide throughout the 1970s, he played New England venues such as Concerts on the Common, the Orpheum Theatre and Paul’s Mall in Boston, Music Inn in Stockbridge, and the Shaboo Inn in Connecticut. In October 1977, he was the musical guest on Saturday Night Live.

In 1976, Taj left Columbia for Warner Bros. Records and recorded three albums. But with disco ruling the charts and heavy-metal bands starting to dominate the market for live shows, the label did not renew his contract when it ended in 1978 and he went without a record deal for a decade. In 1981, he moved to Hawaii and kept a low offstage profile but maintained an exhausting concert schedule throughout the 1980s – appearing at festivals in the US, the UK, Canada, Europe and Australia. He returned to New England often to play venues including Jonathan Swift’s in Cambridge, Hampton Beach Club Casino and the Palace Theatre in New Haven.

In 1986, he recorded Taj – hailed as his “comeback album” – followed by 12 more albums over the next 20 years, including Señor Blues (1997) and Shoutin’ in Key (2000), both of which won the Grammy for Best Contemporary Blues Album. He won his third Grammy in 2007 for TajMo – which featured a guest appearance by Bonnie Raitt – and a Grammy nomination for his 2008 release Maestro.

In 1995, the Water Lily Acoustics label released Taj’s most adventurous album, Mumtaz Mahal, on which he fused blues with traditional Indian instruments like the Mohan veena, a Hindustani classical guitar, and the chitravina, a fretless lute. In 1998, he contributed to the Americana album Largo, based on the music of Antonín Dvořák, along with Cyndi Lauper, Willie Nile, Joan Osborne, Rob Hyman, Garth Hudson, Levon Helm, and The Chieftains.

In the 2000s, still recording and performing as much as ever – and playing his first show in Russia in 2013 – Taj received a number of prestigious awards: In 2006 he was named the official Blues Artist of the Commonwealth of Massachusetts; in 2009 he was induced into the Blues Hall of Fame; and in 2014 the Americana Music Association gave him a Lifetime Achievement Award. In 2017, he appeared at Carnegie Hall alongside a host of household names in a star-studded tribute to Aretha Franklin.

“I just want to be able to make the music that I’m hearing come to me – and that’s what I did,” Taj said in 2019, reflecting on his 60-plus years performing. “When I say, ‘I did,’ I’m not coming from the ego. The music comes from somewhere else. You’re just the conduit it comes through. You’re there to receive the gift.” 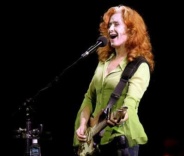