In March of 1968, Peter Wolf followed Joe Rogers onto the airwaves to become the second DJ at WBCN’s American Revolution. Born in New York City, Wolf studied art and painting before the blues refocused his attention on music and he settled in Cambridge. Soon the singing novice and harmonica trainee became a regular in the nightclubs, meeting and jamming with A-list favorites like Muddy Waters, John Lee Hooker, Howlin’ Wolf and James Cotton. When Wolf played the Boston Tea Party as a member of The Hallucinations, Ray Riepen saw not only a talented lead singer, but one who could equally mesmerize on the radio. “He had a beautiful understanding of what to do with the radio,” Joe Rogers said of Wolf. “He understood something about show business and how to grab people‘s attention, then what to do with them once you had them.”

Peter Wolf didn’t just arrive at the station for his overnight show with a box of records to play, he arrived with a plan. He had a theme song: “Mosaic” by Art Blakey and the Jazz Messengers, plus an entourage including co-host Charlie Daniels, renamed ‘Master Blaster,’ who called his boss ‘Woofuh-Goofuh.’ Wolf explained, “I brought all my records and 45’s in; lots of blues, R & B [and] rock and roll.” In his husky growl, he’d grant blessings on the “stacks of wax,” “mounds of sound” and the “platters that matter.”

But by the fall of 1968 Peter had joined a new group of musicians, The J. Geils Blues Band. Soon his growing commitment to that group edged into his all-night radio turf. “By early December,” Sam Kopper related, “we had to give Peter the option: you can either do overnights or you can become a rock star.” Wolf went with the band, and the rest, of course, is history. 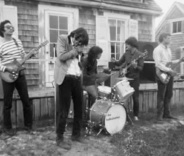