Growing up in a small town in Missouri, Pat Metheny initially made music on a trumpet, just like his father and grandfather and older brother Mike did before him. He was 9 when he started, but by age 11, his interest turned to guitar. “I’m chronologically right at that age when the electric guitar became an iconic symbol of something that was happening in the world,” he recently said, referring to the meteoric rise of the Beatles. But then his brother brought home a Miles Davis album, and young Pat’s interest switched from rock to jazz. One of his earliest influences was guitarist Wes Montgomery, under whose spell he fell so deeply, he learned how to play, like Montgomery, with his thumb and in octaves, before developing his own style. Metheny worked at his own natural talent so hard, he was soon noticed by older local musicians, and by the age of 14 was playing in clubs around Kansas City. Following a teaching stint in Miami when he was 18, a right time-right place scenario led to his performing with vibraphonist Gary Burton at a Wichita jazz festival, which was followed in short order by an offer to teach at Berklee College, then join Burton’s band. Though he was constantly on the road, Metheny kept an apartment in Cambridge for close to 15 years, during which time he started his own group, regularly playing in such local venues as Club Zircon, Pooh’s Pub, and Ryle’s where, he said, “I would get together bands and try out musicians.” In the years since then, Metheny has recorded scads of solo and varied-format albums, has won 18 Grammy Awards, and has worked with, among others, Ornette Coleman, Herbie Hancock, Mike Brecker, Dewey Redman, and David Bowie. His current group is the Unity Band, featuring Chris Potter, Ben Williams, and Antonio Sanchez playing Metheny originals. Although he came up in the music world with his trusty Gibson ES-175 (which he got when he was 13), he retired that guitar a number of years back, and now plays an Ibanez Pat Metheny model.
(by Ed Symkus) 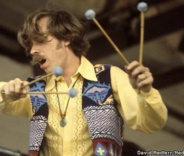