Jon Butcher was guitarist/singer/songwriter for The Jon Butcher Axis and is presently with Farren Butcher Inc.

It’s hard to pinpoint single events as being the greatest, having the most impact and generally being the most memorable. I’ve been luckier than most in the scope of my career, with an abundance of memorable events and professional milestones. Few of those events however rise to the occasion of seminal. With all of the world tours, hit records, accolades and more one event might be called defining, that being the three sold out nights at the (old) Boston Garden in support of one of Boston’s most identifiable music icons, the mighty J. Geils Band .

Releasing one of their biggest records in Freeze Frame, the Geils band was at their apex. Perennial favorites of the legendary Boston music scene the Geils band was red hot in the Fall of 1982. This meant platinum sales and sold out shows, and Geils was poised to cash in on years of touring and hard work. I couldn’t possibly have predicted though how their good fortune would also become mine.

My band- the Jon Butcher Axis was having it’s own kind of professional epiphany. For Derek Blevins, Chris Martin and myself all of the hard work finally began to come together in obvious ways. The shows became bigger and wilder, Boston’s WBCN got behind one of our songs, added it to their regular rotation and it began to feel like we were going places. Their was a buzz around Axis that was palpable; we could sense that something was coming and that we were at the beginning of a new chapter.

It was the week after Christmas 1981 that we got the nod to open up for the Geils band on a short run of dates throughout the Northeast. In those days the Geils band would occasionally bring an up and coming local band as an opener and somehow we were chosen. We did 4-5 shows- Providence, Hartford, Portland ME and New Haven. I’m not sure who initiated the call but I do remember that Seth Justman expressed and interest in producing the band and their management was eyeing us as well.

Freeze Frame was released just after just after the New Year in 1982 and we were again invited as opening act, this time around the US and the general feeling was that Seth Justman and management were responsible for making it happen. By this time the two bands and road crews were bonded, in sync and ready to hit the ground running. To be sure this was JBA’s first National tour and first exposure to what big time success might look like. Having the four Northeast warm-up dates under our belt we felt like there wasn’t anyplace we couldn’t play, nothing we couldn’t do. And as a band with no record deal, no booking agent deal and no clout we couldn’t believe our good fortune.

The first show was at Cobo Arena on 1/28/82 in Detroit and I was scared knobless. We were set to go on promptly at 7:15pm and Peter Wolf came into our dressing room prior and offered some advice; ‘ hit ’em hard, hit ’em fast and don’t falter !’. We took that advice to heart, by the end of that Cobo Arena show we knew that this was going to rank high as one of the most electrifying experiences of our lives. And it was- until the Boston Garden shows beginning on 2/22.

There are no words, no way to communicate the sensory overload of being in the middle of the Garden about to take the stage in front of 20,000 loyal J. Geils fans. Would they kill us ? Would they kill me ? Visions of being run out of town on a rail crossed my mind, and in the moments right before the house lights went down I entertained thoughts of simply running away, escaping to an island and maybe skippering a small fishing boat for tourists. This thought lasted about 10 seconds, the house lights dimmed and the announcement was made, ‘ ladies and gentlemen please welcome Boston’s own, Jon Butcher Axis !’

Suffice it to say much of that JBA set is still a blur but the show was an unqualified success and by the end of that third night at Garden we had set our controls for the big time. By the end of the Freeze Frame tour JBA had secured a record deal, several tours, a publishing deal and all the rest. Our rock ‘n roll fantasy had come to life in a way few others would experience, playing with one of the greatest live bands of all time- the mighty J. Geils Band. Thanks to Seth, Peter, Danny, Stephen, Magic Dick and J. we were able to not only play one of the coolest gigs there ever was on three successive sold out nights, but then shotgunned into the National spotlight and began a recording career that continues to this very day. 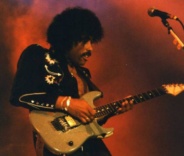