Who hasn’t heard of American Bandstand?  It was part of our daily lives in the late 50s and into the 60s.  We idolized Dick Clark, knew the dancers, and rated the records.  During this time, Bob Clayton was hosting a successful radio program on WHDH.  Although trained as an attorney, Bob transitioned into radio and hosted his popular show “Boston Ballroom” beginning in the ’40s and into the ’60s, featuring the popular music of the day.  He was an excellent interviewer, appealing to young and old and had a talent for spotting hits, frequently launching careers by having an artist introduce his or her latest song on the show.  In 1957, with the popularity of Bandstand, Bob took his show to WCVB and Boston Ballroom became a live broadcast dance show.

Unlike Bandstand, Bob’s show featured a different local high school each week.  He even travelled to area schools and surveyed the students to determine their favorite songs.  Sometimes the students were invited to the show to deliver the survey results.  Each week featured a different celebrity guest and included Ella Fitzgerald, Tony Bennett, and Johnny Mathis.  Freddie “Boom Boom” Cannon was a frequent guest, being one of our local celebrities.

Not yet old enough to drive, each week my friends and I persuaded one of our dads to drive us to West Roxbury to a dance at Catholic Memorial High School.  One momentous night in 1964, we learned that CM was going to be on Boston Ballroom!  Being an all-boys school, we hoped our chances of being chosen were better than if we were at our large public school, Norwood High.  By some miracle, my dance partner and I were selected.  I’d love to believe that our wholesome good looks and excellent dance moves are what got us up on the stage, being introduced as the official representatives of Catholic Memorial going to Boston Ballroom.  We were on our way to our fifteen minutes of fame.

Apparently, either the show or the school was not going to just let us loose onto the dance floor.  A few weeks before the show, we were required to meet with a dance instructor.  We were checked out for ability and appropriateness.  After all, this was a Catholic school in Boston.  Then, much to our surprise, we were taught the bossa nova.

I guess Eydie Gormé‘s “Blame It on the Bossa Nova” had been recently released and, evidently, we were going to be the only people under 40 who could do the dance. A couple was chosen to perform this “spotlight dance,” the big number for the day. A little coaching on how to move around the dance floor and we were ready.

The big day arrived and we were herded from a bus directly onto the dance floor.  I remember wearing a yellow angora sweater and matching skirt.  There was no way I was fading into the background. Our celebrity was Little Peggy March singing “I Will Follow Him,” which was on its way up the charts. She was only 15 and not quite as exciting as Freddie “Boom Boom” Cannon would have been,  but we were close enough to see the heavy stage makeup and hair spray.

Suddenly, it was over, we were back on the bus and back to being normal teenagers. All of our friends and relatives got to see us on the small screen, probably black and white now that I think about it.  We’d been the only teenagers in history, I believe, to dance the bossa nova on a television show.  We had our moment to shine and a great memory that far outlasted Boston Ballroom. 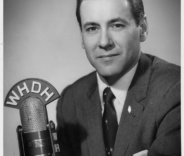