Betting that he could promote a white teenage band as successfully as he did his hit black group New Edition, in 1984 composer-producer Maurice Starr set his sights on New Kids on the Block — originally featuring Donnie Wahlberg, Daniel Wood, Jamie Kelley, and Jordan and Jonathan Knight. Starr replaced Kelley with Joey McIntyre, and helped the young teens develop a fresh sound that bridged pop and funk and sugary ballads. Their popularity soared among teenage girls, resulting in millions of album sales, and hits including “Please Don’t Go Girl” and “Cover Girl.” The group released a solid but low-selling album, Face the Music, without Starr in 1994, and broke up soon after.  After a lengthy hiatus, the band reunited in 2007, released 2008’s The Block and embarked on a successful tour.
(by Ed Symkus) 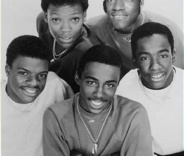