Drummer Bobby Chouinard was born in Brockton, MA in 1953, and after cutting his teeth with the likes of Utopia, Orphan, James Montgomery, Duke and the Drivers, and Wiley Crawford, he moved to the New York City nightclub scene, where his powerhouse drumming style fueled late ’70s rock ‘n’ rollers Robert Gordon and Chris Spedding. Chouinard spent the Eighties working with everyone from Billy Squier, Ted Nugent, Peter Wolf, and Cher, and drummed on Alice Cooper’s 1989 hit album, Trash; Chouinard’s raw energy and pure attack led Cooper to call him one of the best musicians he ever worked with. Chouinard passed away in 1997 at age 44 of a massive heart attack, leaving behind a wonderful legacy, countless fans and a pure love for the drums.
(by Roger Chouinard and Stephen Haag) 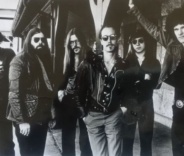